Last weekend was spent with a trip to Yadagiri. From Hyderabad, there are many buses to reach this place. From Jublee Bus Stand, every 15 mins one bus is available towards here. Also, other stations MGBS has buses, not this frequent. It is around 60kms from Hyderabad and takes 1hr to 1:20 hrs to reach place. Totally, I feel the inside city journey is more than that of outsider city journey towards Yadagiri. Route is to take NH202 High way, which leads to warangal, till raigiri and take other turn for 15 mins to reach Yadagiri.

One of the few temples near to Hyderabad is YadagiriGutta which is place for Lord Vishnu in the form of Sri NaraSimha Avatara of the Ten great avataras mentioned in Hindu epics. Lord NaraSimha Swamy, is half man and half lion, incarnated to kill the evil king Hiranyakasipa (refer to Sanskrit books for exact name) who got the boons from Lord Bramha not to get killed by either man or by animal, either in day or in night, either by metals or by body, either at outside house or insider house, either in sky or on soil etc.

To kill that evil king without voilating the boons given by Lord Bramha, Lord Vishnu in the form of Sri Narasimha (Nara (man) + Simha (lion)) Avatara, is neither a man or nor a animal, kills him in the mid day (i.e exactly 12’O clock) which is neither day time nor night time with his own nails as the weapon which is neither body nor metal at the entrance of the house (called dwara in sanskrit) which is neiter inside of house nor outside by keeping the king’s body in his lap which is neither sky nor soil.

This is the one of the two existed Narasimha Swaymy templs in Andhra Pradesh. Another one located in Simhachalam near to Vizag. It is said that Lord NaraSimha Swamy after killing the evil king, stayed here on this single rock hill (called gutta in sanskrit) untill his anger got under control. That is the reason, the status/idol of Narasimha Swamy at this place is very fearful manner. That is the reason the temple authority not directly show this idol to devotees, by side view. There is another idol established by temple authority for front view to the devotees.

Apart from the historic/mythological importance to this place, there are some more aspects I found here. This place is very small village and completely entire village established just due to this Temple. But, this is a very plesenet place to spend in free time without any traffic noises which become part of our daily routine in city/corporate life. This is the first place I found Tangas (a cart pulled by horse) getting used in place Autos in Andhra Pradesh. Though Autos available, but very few in number. Tanga is a nice experience too. We hired one tanga to reach Old Template which resides in down hill about 2 kms from bus stand. 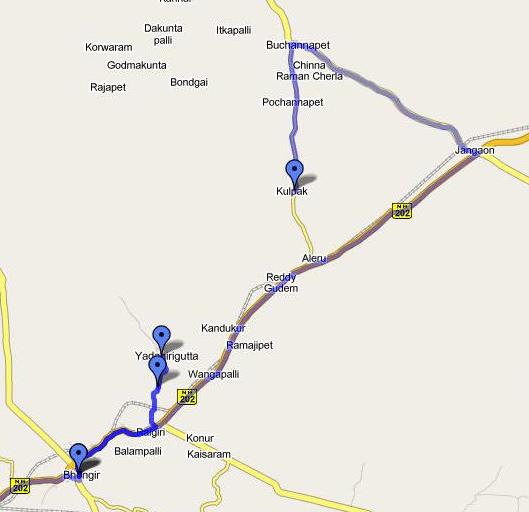 There are other visiting places near by as well.
1. Surendra Puri, comes 2 kms ahead of Yadagirigutta, which has the replicas of all most all of Indian famous temples idols. But entry ticket is too much argues some people which is 200/- in working days, 300/- in weekends.
2. Kulpaka, one of the few jain temples in andhra pradesh, which is 25-30kms from Yadagiri, 20kms from raigiri which is the junction for other two places. But, local people doesn’t have much idea about this temple even though it’s very near, so you might not get much help by enquiring about this. Better hire a vehicle to see this place as bus route is not direct.
3. Bongir Fort, built on single rock hill in 12th centuary. This comes much early before raching Yadagiri. To cover all, better first drop here before going to Yadagiri. From here, bus frequency is very hight towards both Hyderabad and Yadagiri. Fort is very close to bus stop. It has very robus boundary wall covering entire single rock hill with a gaint rock wall entrance. Though main buildings insider the fort were vanished as Tourism Dept in AP never shown interest in preseving these historic monuments. Though I’m not sure about the kings who built & ruled this fort, by first look it is very attractive with wide long gaint rock walls, never get a chance to see these except in theatre :).

You can find all these places in the above map starting from Bhongir.

Overall, it is one day weekend trip for all. Great relief for those who work entire week without any other thought. Though, it’s very rare to check for accommodation in this place, there is one devastanam accommdation facility in Up hill along with AP Tourism Punnami restaurent. Some of community based dormitories available in down hill like Arya Vysa Satram etc. Apart from these, always private hotels are available charging in the range 200-400/- per day.

26 thoughts on “Trip to YadagiriGutta from Hyderabad”